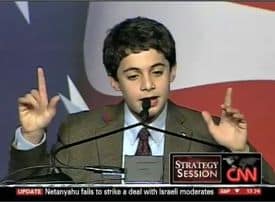 Many of you may remember when, in 2009, a 13-year old named Jonathan Krohn became a right wing sensation after railing against liberalism at the conservative CPAC conference. Times change, though, and the now 17-year old Krohn's largely rejected a lot of that rhetoric.

"I think it was naive," Krohn now says of the speech. "It’s a 13-year-old kid saying stuff that he had heard for a long time.… I live in Georgia.

"We’re inundated with conservative talk in Georgia.… The speech was something that a 13-year-old does. You haven’t formed all your opinions. You’re really defeating yourself if you think you have all of your ideas in your head when you were 12 or 13. It’s impossible. You haven’t done enough."

"I want to be Jonathan Krohn," he said, "and I’m tired of being an ideology, and it’s not fun and it gets boring and it’s not who we are as individuals."

Krohn also says that unlike a lot of the conservative who once idolized him, he's in favor of marriage equality.