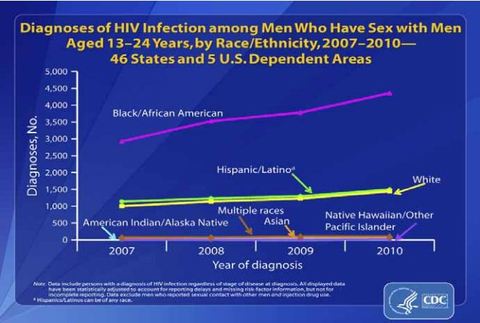 The Black AIDS Institute’s latest report, “Back of the Line: The State of AIDS Among Black Gay Men In America” offers distressing news: black men living in the United States have a 1 in 4 chance of contracting HIV, even though they represent only 1 in 500 Americans.

HIV represents a lifelong threat for Black gay men. A young Black gay man has a roughly 1-in-4 chance of being infected by age 25. By the time he is 40 years old, the odds a Black gay men will be living with HIV is roughly 60%. One can scour the entire world and struggle to find a population more heavily affected by HIV/AIDS than Black gay in the U.S.

Black gay men’s higher risk of HIV does not stem from higher levels of risk behavior. Rather, their disproportionate risk of HIV can be traced to their poor access to health services, a high prevalence of sexually transmitted diseases, and early patterns of sexual behavior among young gay men.

No one has responded to this health crisis with the urgency it warrants.

Here’s a PDF of the Institute’s report.