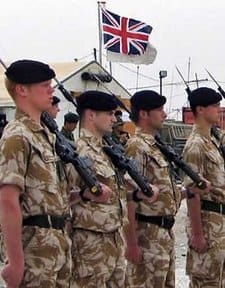 This Friday, gay and lesbians in Britain's armed forces will hold their annual conference, the 12th such conference since 2000, the year a ban on being an out and proud serviceperson was lifted.

This year's event is unique, however, because the Royal Army is for the first time ever sending senior leaders to sit in on the LGBT-centric forum.

For the first time, the conference includes not only the LGBT community, but also the military's leaders, policy makers and welfare officers.
…
Major Damian Jenkins, chair of the army LGBT forum and one of the organisers of Friday's conference, said: "This change reflects the recognition of commanding officers of the benefits of a diverse workforce, and a desire to be more inclusive.

"The audience will range from the most junior ranks to senior generals. Between us we hope to identify ways in which the military can continue to keep pace with the liberal society that it serves."

It's unclear how many service personnel were gay before the ban was lifted over a decade ago, but the LGBT group Stonewall estimates about 14,000 active servicemen and women are gay or lesbian.