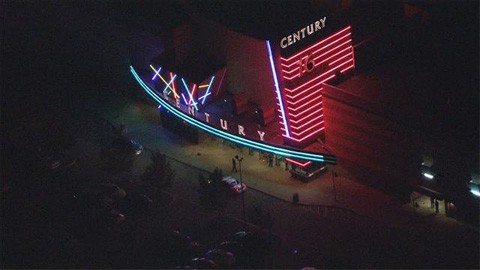 Twelve people are dead (earlier reports had the number at 14) and 50 injured after a gunman opened fire at a screening of The Dark Knight Rises in Aurora, Colorado late last night.

The gunman, who is in custody, stood at the front of the theater and fired into the crowd about 12:30 a.m. MDT at a theater at a multiplex theater in a mall in Aurora. Witnesses tell us he released some sort of canister. They heard a hissing sound and some gas emerged and the gunman opened fire," Aurora Police Chief Dan Oates said at a news conference. Police, ambulances and emergency crews swarmed on the scene after frantic calls started flooding the 911 switchboard, officials said. Officers found the gunman near a car behind the theater. "A gas mask, rifle, handgun at least one additional weapon (were) found inside," he said.

The suspect arrested is a 24-year-old male. He has been identified as James Holmes.

An unverified video reportedly showing the chaos at the theater after the shooting has surfaced on YouTube.

Watch (warning: footage of at least one patron stained with blood), AFTER THE JUMP…

Michelle and I are shocked and saddened by the horrific and tragic shooting in Colorado. Federal and local law enforcement are still responding, and my Administration will do everything that we can to support the people of Aurora in this extraordinarily difficult time. We are committed to bringing whoever was responsible to justice, ensuring the safety of our people, and caring for those who have been wounded. As we do when confronted by moments of darkness and challenge, we must now come together as one American family. All of us must have the people of Aurora in our thoughts and prayers as they confront the loss of family, friends, and neighbors, and we must stand together with them in the challenging hours and days to come.

“Ann and I are deeply saddened by the news of the senseless violence that took the lives of 15 people in Colorado and injured dozens more. We are praying for the families and loved ones of the victims during this time of deep shock and immense grief. We expect that the person responsible for this terrible crime will be quickly brought to justice.”

"Warner Bros. is deeply saddened to learn about this shocking incident. We extend our sincere sympathies to the families and loved ones of the victims at this tragic time."

A San Diego woman identifying herself as James Holmes's mother spoke briefly with ABC News this morning.
She had awoken unaware of the news of the shooting and had not been contacted by authorities. She immediately expressed concern that her son may have been involved.

"You have the right person," she said.

"I need to call the police," she added. "I need to fly out to Colorado."

An early news report from ABC News, AFTER THE JUMP…