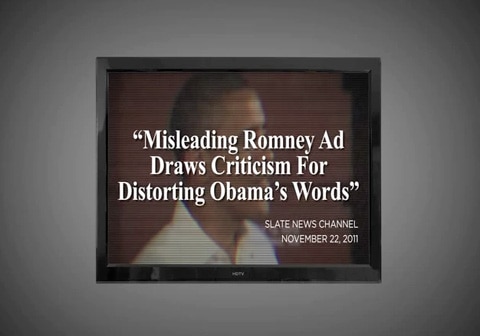 The Obama campaign is fighting back against distortions by the Romney campaign of a speech he gave on small businesses, Reuters reports:

Romney's campaign seized on Obama's comment that "if you own a business, you didn't build that," to portray the president as unsympathetic to small businesses that help boost the U.S. economy. Obama's point was that successful business owners have had the public's help at some point in their lives through public education, roads or other government-funded projects that created an environment for businesses to bloom.

"It wasn't a gaffe," Romney said at a trucking company just outside of Boston last week. "It was instead his ideology."
On Tuesday Obama's campaign released an ad rejecting Romney's interpretation of the remarks, and at a campaign event in Oregon, the president addressed the issue directly.

"He's been twisting my words around to suggest that I don't value small business," Obama said of his Republican opponent.

The Obama campaign also released a web video calling out Romney on the remarks as well as a TV spot.

Watch them both, AFTER THE JUMP…