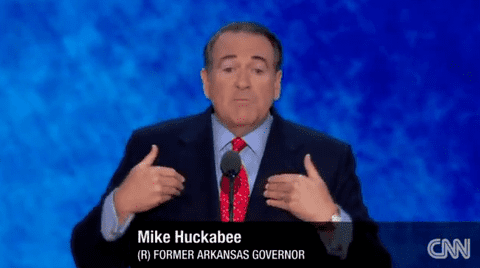 Former Arkansas Gov. Mike Huckabee, a man who has questioned the existence of evolution, addressed the elephant in the room at the Republican National Convention last night: candidate Mitt Romney’s Mormon faith.

There has been a lot of talk this election season whether the GOP’s most vocal base, Evangelicals, will support a man who worships in The Church of Jesus Christ of Latter-day Saints.

As Romney and his campaign team try to reclaim his faith, rather than run away from it, Huckabee tried his darndest to reframe the debate by describing President Obama as an evangelical whose marriage politics target the faithful.

I want to clear the air about something that has been said. People wonder whether guys like me, an evangelical, would only support a fellow evangelical?  Well my friends I want to tell you something, of the four people on the two tickets, the only self-professed evangelical is Barack Obama. And he supports changing the definition of marriage. Believes that human life is disposable and expendable at any time in the wound, even beyond the womb. And he tells people of faith that they have to bow their knees to the God of government and violate their faith and conscience in order to comply with what he calls, health care. Friends I know we can do better.

Watch video of Huckabee’s remarks AFTER THE JUMP.