Over the weekend Brandon made note of 'Gaymercon', a proposed first-time meet-up for LGBT video gaming, which is being funded via Kickstarter: 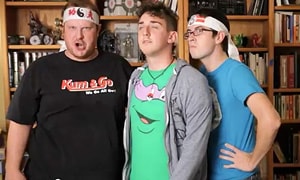 These guys look serious, and Gaymercon could be huge. There's considerable overlap between the 20-something gay male demo and the geek demo, and in some places there's almost no distinction at all. There was a moment in South Florida, seven or eight years ago, when being 23, male, gay, and sociable very nearly required one to be conversant with underground anime titles, and to know the basic mechanics of an X-Box controller. Most of those young guys and their geekfellows around the country are thirty now, and have travel budgets. And then some. In the first 24 hours of the Gaymercon Kickstarter fund-drive, donors gave Gaymercon more than half of the $25,000 necessary to launch the conference next year.

Video reposted, AFTER THE JUMP…