The draft language of the Republican Party Platform is out and Buzzfeed's Chris Geidner enlightens us on the various elements which deal with gays, marriage and such: 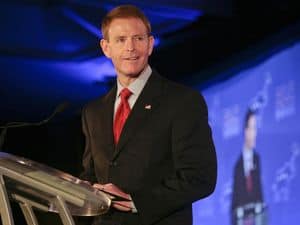 The Republican Party platform will strongly oppose the Obama administration's decision not to defend the Defense of Marriage Act, the federal law that bars recognition of same-sex couples' marriages, in court and will support "a constitutional amendment defining marriage as the union of one man and one woman," according to the draft platform language approved by subcommittees today.

Hate group leader Tony Perkins, the President of the Family Research Council, authored the marriage plank. “You should read the entire plank on marriage, which I wrote. I feel very happy about it. I feel pretty optimistic about the outcome here," he tells Buzzfeed.

Also included: "We oppose the Administration's open defiance of this principle [of separation of powers] — in its handling of immigration cases, in federal personnel benefits, in allowing a same-sex marriage at a military base, and in refusing to defend DOMA in the courts…[W]e believe that marriage, the union of one man and one woman must be upheld as the national standard, a goal to stand for, encourage, and promote through laws governing marriage."

The laughable kicker? This language:

"We embrace the principle that all Americans have the right to be treated with dignity and respect."

"Their lack of awareness of why marriage matters for gay couples as well as for non-gay couples is matched only by their failure to understand basic American civics, such as the role of the judiciary and the meaning of 'equal protection under the law.'…It's actually tragic to see a party that professes its beliefs in values such as freedom, limited government and personal responsibility taking such an extreme position in favor of denial, exclusion and the undermining of constitutional safeguards, not to mention attacking families seeking the commitment of marriage."

Read a low-quality facsimile of the draft, AFTER THE JUMP…