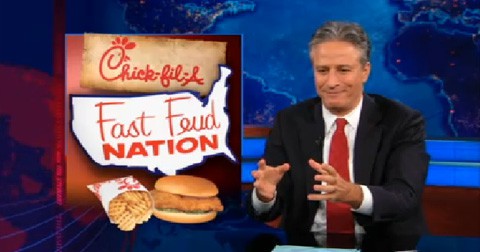 "And what better way to stand up and say I oppose gay people's right to get married than to head down to a Chick-fil-A, grab a'hold of two buttery buns, split em open and gobble down some of that hot greasy c*ck. You're just diving into, eatin that c*ck, special sauce all over your face. You don't want to swallow but you gots to."

"While we don't release exact sales numbers, we can confirm reports that it was a record-setting day," Steve Robinson, Chick-fil-A's executive vice president of marketing, said in a statement.

Previous Post: « Obama Appoints Gay Man Under Secretary of the Air Force
Next Post: Romney Tells Harry Reid ‘It’s Time to Put Up or Shut Up’ About His Alleged 10 Years of Unpaid Taxes: VIDEO »