There's lots of dubious Gaga rumors floating around, so take this Page Six report with a grain of white stuff: 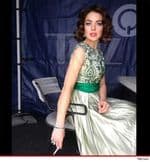 …“Lady Gaga and Lindsay caused a stir last month when they had their ‘sleepover’ at the Chateau [Marmont],” a Hollywood insider told us, adding, “and now it turns out that Lindsay will be starring in Gaga’s new video from her upcoming album.”

…But the potential Gaga gig represents a more mainstream opportunity. “Due to Gaga’s superstar status, this would be Lindsay’s biggest [role] by far in many, many years,” a source said.

But others wonder why Gaga’s involving Lohan. “Why this huge artist — who could literally have anyone she wants — chose someone currently at the bottom of the Hollywood food chain remains a mystery,” one observer sniffed.