Helen Gurley Brown, the former editor of Cosmopolitan, is dead at 90, the NYT reports: 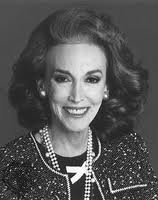 Ms. Brown, who wrote “Sex and the Single Girl,” took over at the magazine — giving it its sexually frank tone — in 1965. She remained editor until 1997 and is still listed as editor in chief for Cosmopolitan International on all mastheads. Until her death, Ms. Brown was known for coming into her pink corner office nearly every day.

The Hearst statement reads: “It would be hard to overstate the importance to Hearst of her success with Cosmopolitan, or the value of the friendship many of us enjoyed with her. Helen was one of the world’s most recognized magazine editors and book authors, and a true pioneer for women in journalism—and beyond.”