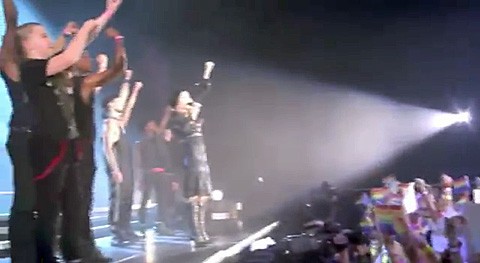 As promised, Madonna spoke out for LGBT rights at her concert in St. Petersburg, the Russian city that recently passed a law banning so-called “gay propaganda”.

“Do we live in fear?” Madonna reportedly asked the audience, who of course responded in the negative.

Performing in black lingerie with the words “No Fear” scrawled on her bare back, Madonna urged the audience – most wearing pink wrist bands distributed at the door – to “show your love and appreciation to the gay community”.

“We want to fight for the right to be free,” she said.

The American singer has turned a two-concert tour into a platform for comment on Putin’s Russia.

Madonna has also been using her stage to fight for the riot grrrl band Pussy Riot’s release from prison.

There’s no word on whether officials will try to fine the Material Girl for all this rabble-rousing, but Deputy Prime Minister Dmitry Rogozin called her a “former whore” — or “slut,” depending on one’s translation. And even some activists are criticizing the singer.

“One should not mix showbusiness with human rights activism,” gay activist Yuri Gavrikov said. “If she wanted to support the LGBT community, she could have … refused to hold concerts in Russia.”

Here’s a picture of Gavrikov’s one-man protest outside the concert venue: 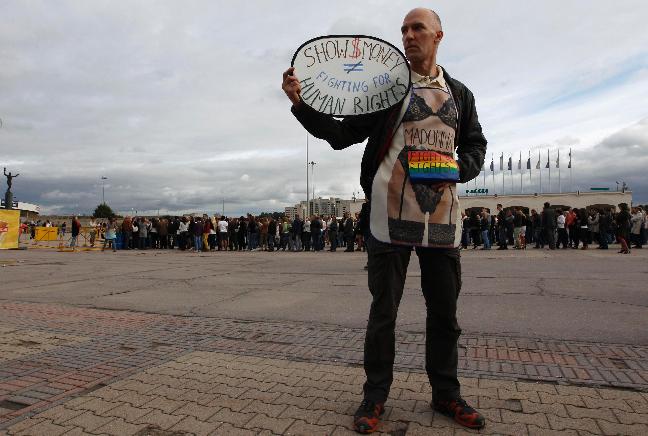