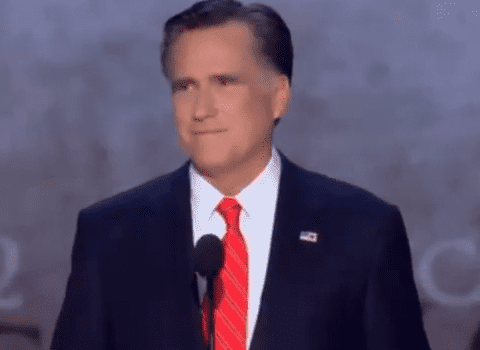 Hoping to warm over potentially chilly voters, Romney spent a chunk of his allotted time covering his biography, including his father’s journey from Mexico to America, starting Bain Capital, a political thorn he presented as a small business success story, and raising his five sons with wife Ann, all with more emotional display than we’ve seen from the former governor.

Romney of course spent plenty of time contrasting himself with President Obama, a commander-in-chief Romney says “has disappointed America” and whose reelection campaign is about “attacking success.” The GOP candidate urged voters to “put the disappointments of the last four year” and “look ahead to what can be.” It wasn’t all sunshine and deligh, though. Romney made sure to say he’ll turn back the clock on equality, telling the crowd “I’ll honor the institution of marriage” and warning that e”very American is less secure today
because [Obama] has failed to slow Iran’s nuclear threat.”

“Now is the time to restore the promise of America” and two other variants provided the most optimistic parts of the speech, which ended after about 45 minutes with Romney’s wife, sons and grandchildren and other family members joining him on stage. A wave of balloons soon followed.

Watch it all, AFTER THE JUMP.