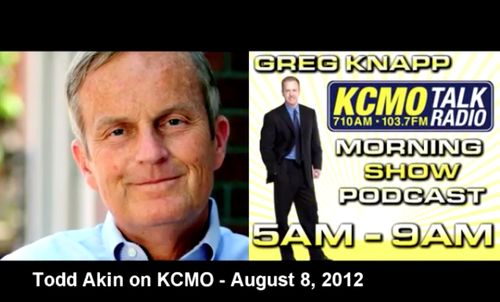 The biggest practical problem with letting elected officials meddle in people's personal lives is this: They often don't know anything about the things with which they're meddling.

AFTER THE JUMP, hear US Rep. Todd Akin, a Republican of Missouri, defend the outlawing of the morning-after pill, which he insists causes abortions, which it does not. (Rather, it prevents fertilization from occurring in the first place. It takes a while for even a very determined sperm to rendezvous with a willing and waiting egg.)

Rep. Akin has just become the Republican nominee bound to take on Sen. Claire McCaskill in November. Sen. McCaskill was a vocal proponent of the repeal of Don't Ask, Don't Tell, and is currently engaged in an Obamaesque evolution on marriage equality. Rep. Akin is undergoing no such evolution — he thinks marriage equality is likely to destroy civilization.

Previous Post: « At Family Leadership Summit, Iowan Conservatives Vow To Defeat Judge Wiggins
Next Post: NEWS: A Pansexual Legislator In Texas, A Tormented Androgyne In London, And The Sanctity Of Marriage In Nevada »