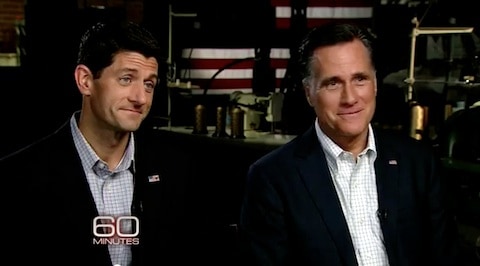 Mitt Romney and Paul Ryan sat down for their first joint interview with CBS News' Bob Schieffer in which they discuss the pick process, how Ryan feels about being the VP pick, their message, and how many tax returns Ryan plans to release — "two years", the same as Romney…

Ryan will be skipping Florida today while Romney continues what was supposed to be their joint bus tour there. Could it be because Ryan wants to do away with Medicare?:

Romney adviser Kevin Madden denied that the campaign was keeping Ryan out of Florida because of his proposal to privatize Medicare for people under 55; tinkering with the program for the elderly has long been toxic in Florida politics.

"This has more to do with expanding our bandwidth," he told reporters here on Sunday morning. "Gov. Romney is going to be talking about the issues that are important to Floridians."

All of that has added up to a a big fat zero, consistently, from the Human Rights Campaign on its congressional scorecard, except for the session in which Ryan voted for ENDA, when he scored a 10 out of 100. (Predictably, a fleeting 10 rating is enough to send validation-starved gay Republicans into spasms of delight over the choice of Ryan as Romney's running mate.)

When the topic of gay rights comes up now, Ryan accuses the media of focusing on a meaningless issue and tries to change the subject. "Actually, I came on to talk about the debt crisis we have and the budget, and I think that's the driving issue of this election," he said when asked about gay marriage on Meet the Press this past February. "But look, I supported the Wisconsin amendment to define marriage as between a man and a woman."

As Think Progress points out, Ryan has a voting record to reflect every anti-LGBT position that Romney has taken.