Reese Witherspoon is set to play a role played by a number of real-life Hollywood women, a romantic comedy called The Beard, according to the Hollywood Reporter: 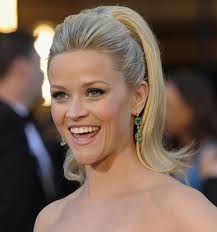 Chernin Entertainment has dipped into its discretionary fund to pick up the project, a spec script by Becca Greene.

Witherspoon will star in the project and produce with Peter Chernin, Jenno Topping of Cherinin Entertainment and Mason Novick.

While it might be tempting to see a story about Witherspoon growing facial hair, the “beard” in the title refers to a member of the opposite sex — usually a woman — who acts as a date for a gay person, giving the illusion the person isn’t gay. Story details were not revealed.

Do you think she's going to draw from experience?