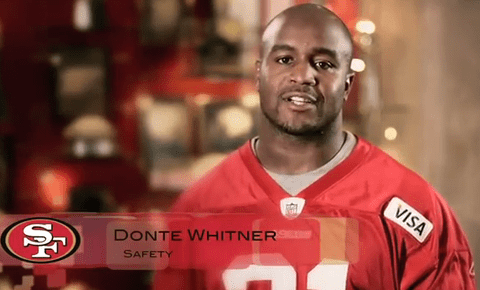 The San Francisco 49ers broke some new ground today by becoming the first NFL team to join the international It Gets Better Project that tells LGBT youth the truth: life can stink, but things do indeed improve.

Sean Chapin, the fan whose Change.org petition successfully pushed the 49ers to record the video, said that the team’s contribution represents a “shining a golden beacon of hope to LGBT youth.”

“As a gay man, I enthusiastically applaud their courage and leadership,” he said.
“This is a proud day for San Francisco, as two of our professional teams have taken a bold stand against bullying. Let’s hope this is only the beginning, and that more NFL and professional sports teams around the country take this opportunity to speak up on behalf of LGBT fans and kids.” That second team, the Giants, joined It Gets Better last year, again at Chapin’s urging.

“The San Francisco 49ers are proud to join ItGetsBetter.org, to let all LGBT teens know that It Gets Better,” says Whitner as he and his teammates explain that life’s challenges make us who we are and that any difficulty we overcome together will make us a stronger person tomorrow.

Their version is better than my summation, though, so take a look AFTER THE JUMP.