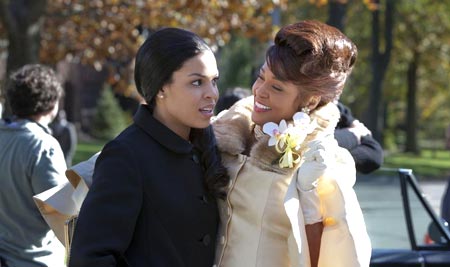 Leaving for the theater to see SPARKLE, the boyfriend wrinkled up his nose. "Is that that Dreamgirls remake?" he asked rhetorically. He doesn't care about movies (…I know!) so I just said "yes" rather than getting into it. Sparkle, like Dreamgirls before it, does pair an "American Idol" alum in her big screen debut (Jordin Sparks / Jennifer Hudson) with a genuine legend (Whitney / Beyoncé) to tell the story of a troubled female pop trio in 1960s Detroit attempting to make it big as Motown explodes. But the similarities are cosmetic. (Which is not, unfortunately, to Sparkle's benefit. If you're going to load up your screenplay with familiar clichés, rob from superior work!)

The immediate jarring difference between the two films is first noticeable in the Jennifer/Jordin throughline. In both stories the biggest talent of the trio has to play second fiddle to "the hot one" but only in the earlier property does the Major Talent bristle mesmerizingly against her runner-up status; Jordin's "Sparkle" is a willing wallflower, happy to let her sister (the crazy gorgeous Carmen Ejogo) sing all of her songs whilst shimmering in the warmth of the spotlight. Sparkle's sister's name is "Sister" and their group is called "Sister and Her Sisters" and the men competing dramatically for their hands (that's a euphemism for vaginas) are named "Stix" (Derek Luke) and "Satin" (Mike Epps). So any moviegoer with a sybilant "S" should avoid all discussions of the movie. 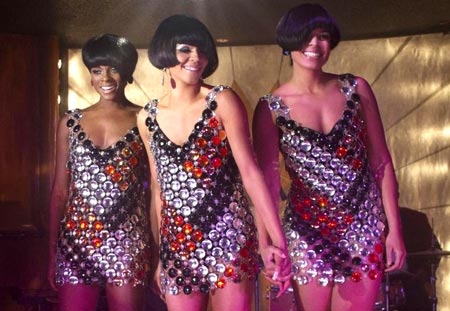 The first few reels are all about setting up the game pieces. Sister and Her Sisters have obvious talent which the men in their life hope to either showcase or exploit, depending on how you read the performances. (Derek Luke in particular keeps you guessing about which it is for Stix and suggests that the man himself doesn't even always know when he's romancing Sparkle.) The first hour is somewhat bland with repetition but scene-stealing cameos from the late Whitney Houston as their very strict bible-studies mama, offer lively punctuation. You don't have to be a great screen actor to have camera-seizing charisma, and Sparkle knows just how and when to use Whitney. Her late film solo of the gospel classic "His Eye is On The Sparrow" is tough to take in some ways what with her raw staccato delivery in such contrast to her vocal legend (this is the same woman who held that note for that long on The Bodyguard soundtrack?) but no matter; it works for the movie and every single Whitney scene energized the crowded theater. It's almost like every single ticket buyer was there for one reason only. 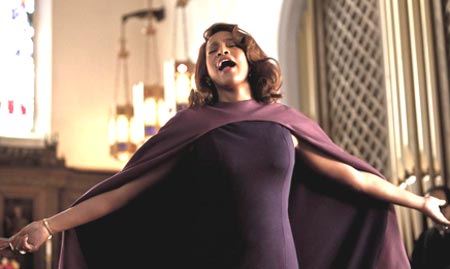 Once Sister brings Satin home to meet Mama during Sunday dinner, Sparkle the movie steps up its game. The dinner sequence is compelling in every way that counts for this movie: complex familial dynamics, racially charged politics, and the tug of war between spirituality and sexuality. But just as the movie steps up its game it throws away the game board insisting on being both a terrible movie and a good one simultaneously for the final hour.

For every sharply acted sequence like that abbreviated Sunday dinner, there are sequences where the actors just can't act their way out of the cardboard clichés (Jordin Sparks in particular has trouble. She doesn't actively embarrass herself but the most generous thing one might say in terms of screen acting is "adequate.") For every piece of smart direction like one static overhead shot of Mama walking Sister right out of her house (richer in feeling than a series of generic closeups would have been), there are moments where the director Salim Akil just loses control of his camera altogether –most noticeably in two violent climaxes which had the audience I saw the movie with laughing with each use of slo-mo or weirdly affected 'This is A Violent Climax Score!' For every beautiful visual touch like a moment in the Jordin's "One Wing" song finale in which the dazzling hard reds of Sparkle's form-hugging gown are backgrounded by soft pink backup girl dresses which are themselves backgrounded by warmly lit white robes of a full gospel choir, there are plentiful bizarre or incoherent visual choices especially the movie's on again off again attempts at 1960s period. When Sparkle takes the stage for her concert finale it's almost as if they've left a time machine subplot on the cutting room floor because we're definitely not in the 1960s — the filmmakers aren't even pretending anymore.

Finally, Sparkle proves herself no Dreamgirl with the lack of any showstopping performance. That's a difficult weakness to overcome in a movie musical. Still, there's so much rage and struggle permeating Sparkle's best performances (Carmen Ejogo taking top honors) and mother/daughter scenes that the movie almost works. But Sparkle just keeps making Sparkle duller. The bombastic uplift of the finale leaves a falsely bland aftertaste, like you've chased a brutal breakthrough therapy session with a handful of Disney Branded Anti Depressants. Shut out the pain. Replace it with big meaningless vocal runs ["Text 1 (866) IDOLS 06  to vote for Jordin Sparks!"] and a blazingly white perma-smile that never falters no matter what the singer is singing about.

What was she singing about again? 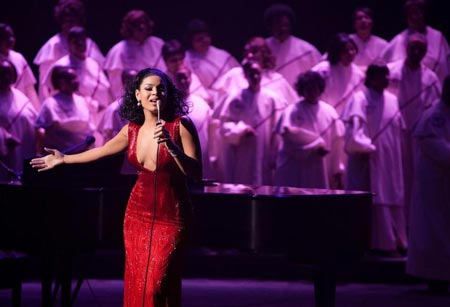