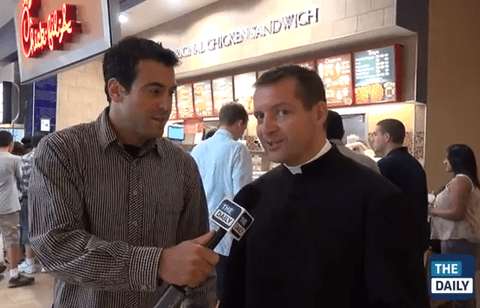 Religious conservatives traveled far and wide to support a Chick-fil-A outpost at the Paramus Park Mall in New Jersey.

The Daily reporter Justin Rocket Silverman was there to get the inside scoop on why they’re backing the fast food franchise. To most, the issue isn’t about free speech, as Fox News and Mike Huckabee would have you believe, but about “traditional marriage.”

“It’s important to support Chick-fil-A and what they believe in, their values, traditional marriage and that’s why we’re here,” said one of the customers who spent one hour of his life waiting in line for a chicken sandwich.

Watch the report AFTER THE JUMP.