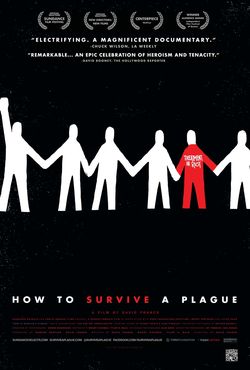 With the release of David France’s How To Survive a Plague only about three weeks away, France and company have released the official poster for the flick, about ACT-UP’s early days fighting discrimination about HIV/AIDS.

How To Survive a Plague is the story of the brave young men and women who successfully reversed the tide of an epidemic, demanded the attention of a fearful nation and stopped AIDS from becoming a death sentence.

This improbable group of activists bucked oppression and, with no scientific training, infiltrated government agencies and the pharmaceutical industry, helping to identify promising new medication and treatments and move them through trials and into drugstores in record time. In the process, they saved their own lives and ended the darkest days of a veritable plague, while virtually emptying AIDS wards in American hospitals in the process.

The powerful story of their fight is a classic tale of empowerment and activism that has since inspired movements for change in everything from breast cancer research to Occupy Wall Street. Their story stands as a powerful inspiration to future generations, a road map, and a call to arms. This is how you change the world.

If you click on the poster, it will pop out to a larger size. I’ve also included the How To Survive a Plague trailer AFTER THE JUMP.