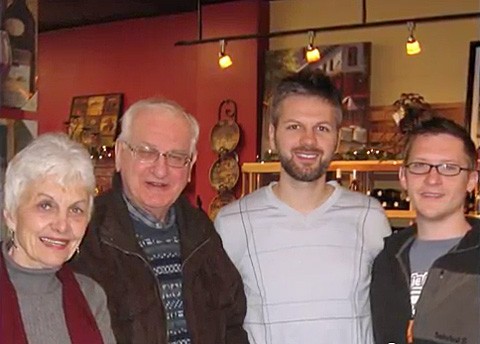 Last week I posted an ad featuring Republican lawmaker Cheryl Pflug for Washington state's Why Marriage Matters campaign. Here's the second ad in a series airing during the Olympics.

The ad released August 6 features United Church of Christ minister Reverend Gib Rossing and his wife, Beth Rossing, talking about their son Jonathan and their hopes for him to be able to marry his long-term partner Ryan. It emphasizes that all loving and committed couples, whether gay or straight, hope to marry for similar reasons: to make a lifetime promise to another person and to share the joys and challenges that life brings.

"Here in Washington, we treat all families with respect and fairness, because we believe in the Golden Rule of treating others as we want to be treated," said Kris Hermanns, Executive Director of Pride Foundation. "This advertisement reflects our fundamental values, and will supplement the conversations we've had across the state about the important of marriage for all loving and committed couples. No one should be denied the freedom to marry the person that they love."

Previous Post: « Elton John Reportedly Thought the Ugly Remarks He Made About Madonna Were ‘Off the Record’
Next Post: Gay Man Allegedly Beaten in Homophobic Attack in Missoula, Montana »