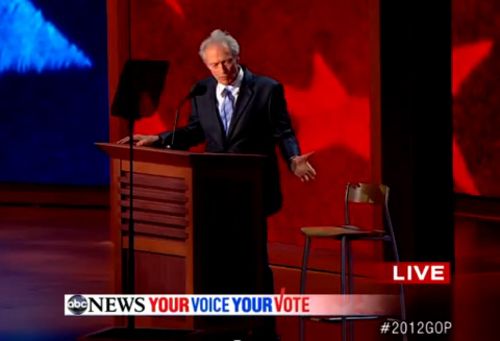 Clint Eastwood is speaking out in his first interview since his disastrous RNC speech in which he spoke to an empty chair.

Said Eastwood to the Carmel Pine Cone: “President Obama is the greatest hoax ever perpetrated on the American people. Romney and Ryan would do a much better job running the country, and that’s what everybody needs to know. I may have irritated a lot of the lefties, but I was aiming for people in the middle.”

Eastwood, who supports marriage equality, is pro-choice, and disagrees with Obama mostly on economic issues,  says he only decided 15 minutes before his speech to use the chair:

“There was a stool there, and some fella kept asking me if I wanted to sit down. When I saw the stool sitting there, it gave me the idea. I’ll just put the stool out there and I’ll talk to Mr. Obama and ask him why he didn’t keep all of the promises he made to everybody.”

Eastwood said he wasn't vetted because he didn't know what he was going to say: “It was supposed to be a contrast with all the scripted speeches, because I’m Joe Citizen. I’m a movie maker, but I have the same feelings as the average guy out there.”