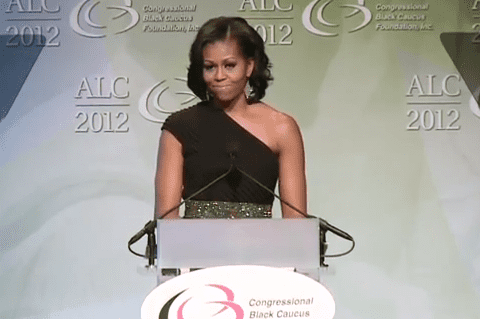 The recent rumor that African-American pastors were telling voters not vote to protest President Obama’s support for marriage equality was a hot topic of conversation at the Congressional Black Caucus’ annual gala last night. And the high-profile leaders seemed to agree that the suggestion was irresponsible.

“Anyone that would encourage people not to vote given what we had to go through to get the right to vote is someone who is operating at the height of amnesia,” Rev. Al Sharpton told Washington’s WUSA. CBC President Dr. Elsie Scott insisted, “We need every vote. Every vote counts.”

And That same message provided a subtext for Michelle Obama’s comments on the importance of voting, and the fact that all laws matter, not just the ones that directly impact respective citizens’ lives:

Much like they did 50, 150 years ago, our laws still shape so many aspects of our lives: Whether our kids have clean air and safe streets, or not. …Whether our sons and daughters who wear our country’s uniform get the benefits they’ve earned, or not… As citizens of this great country, that is our most fundamental right, our most solemn obligation — to cast our ballots and have our say in the laws that shape our lives.
…
And make no mistake about it, this is the march of our time — marching door to door, registering people to vote.  Marching everyone you know to the polls every single election. See, this is the sit-in of our day — sitting in a phone bank, sitting in your living room, calling everyone you know — (applause) — your friends, your neighbors, that nephew you haven’t seen in a while, that classmate you haven’t spoken to in years — making sure they all know how to register, where to vote — every year, in every election.

This is the movement of our era — protecting that fundamental right not just for this election, but for the next generation and generations to come.

Meanwhile, CNN’s Roland Martin says the original AP report about the black pastors’ suggestion was ill-researched and misleading: “Not a single one of these pastors was quoted [in the report] as saying they have or plan to tell their congregations not to vote in the presidential election. Not one.”

Watch video of Michelle Obama’s CBC remarks AFTER THE JUMP.