While Romney rests in Vermont and prepares for three upcoming debates against President Obama, the Republican Party and Paul Ryan plan a response to the Democratic message that will be resonating out of Charlotte this week, Reuters reports: 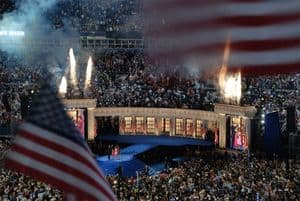 The Romney campaign indicated in a press release that the Republicans would "bracket" the convention with a new emphasis on the question: "Are you better off than you were four years ago?"

In the release, a Romney campaign official kicked off the week's counter-messaging with a blistering attack, saying that at the Democratic convention, Obama "is going to give us a series of excuses, alibis and scapegoats."

"Every president since the Great Depression, except Jimmy Carter and President Obama, who asked for a second term could look back at the last four years and say: "you are better off than you were four years ago," the official said.

Ryan, the Republican nominee to be vice president, will hold a campaign event in the same state in Greenville.

Obama is scheduled to give his speech on Thursday, outdoors, at the Bank of America stadium. Though there are contingency plans to move the event to Time Warner Cable Arena in case of rain, "DNC officials said at a Monday press conference that the event will go forward rain or shine, unless severe weather raises safety concerns."