Minnesota Viking punter Chris Kluwe, like Baltimore Ravens linebacker Brendon Ayanbadejo, is an advocate for LGBT rights and marriage equality. He has recorded three radio ads for Minnesotans for Equality, the group fighting a November ballot that would constitutionally define marriage as opposite sex only. 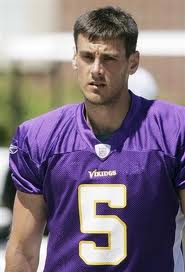 Listen to one of Kluwe's radio ads here.

Now, Kluwe, in the form of an extremely colorful letter, is coming out against Maryland lawmaker Emmett C. Burns, who this week urged Ravens owner Steve Bisciotti to silence Ayanbadejo from speaking his mind on gay rights.

Here's the closing part of Kluwe's letter, published in full on Deadspin.

I can assure you that gay people getting married will have zero effect on your life. They won't come into your house and steal your children. They won't magically turn you into a lustful cockmonster. They won't even overthrow the government in an orgy of hedonistic debauchery because all of a sudden they have the same legal rights as the other 90 percent of our population—rights like Social Security benefits, child care tax credits, Family and Medical Leave to take care of loved ones, and COBRA healthcare for spouses and children. You know what having these rights will make gays? Full-fledged American citizens just like everyone else, with the freedom to pursue happiness and all that entails. Do the civil-rights struggles of the past 200 years mean absolutely nothing to you?

In closing, I would like to say that I hope this letter, in some small way, causes you to reflect upon the magnitude of the colossal foot in mouth clusterf*ck you so brazenly unleashed on a man whose only crime was speaking out for something he believed in. Best of luck in the next election; I'm fairly certain you might need it.

P.S. I've also been vocal as hell about the issue of gay marriage so you can take your "I know of no other NFL player who has done what Mr. Ayanbadejo is doing" and shove it in your close-minded, totally lacking in empathy piehole and choke on it. A**hole.

Previous Post: « Romney on Omission of Troops from His Speech: ‘You Talk About the Things You Think are Important’
Next Post: News: Oreos, Andy Warhol, Eastenders, Syria, Ryan Phillippe »