Former Calvin Klein boytoy Nick Gruber says that Klein has hired a private investigator to follow him around: 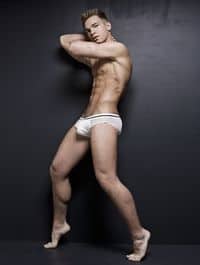 For the last month, Gruber says he and his boyfriend, John Luciano,
have been tracked by a cop-turned-gumshoe. Gruber tells Confidenti@l
that he believes the investigator, a well-known P.I., was hired by Calvin Klein to watch his every move.

But the investigator isn’t sleuthing around incognito. On Monday,
Gruber says the private eye got in a scuffle with Gruber and his friends
at Toy’s Avenue A Soundcheck party in the Meatpacking District.

Luciano said Klein probably misses Gruber. “I understand what it’s
like to be broken-hearted, and I’m sure Calvin’s heartbroken,” he said.
“Nick’s a great guy.”

He said that neither he nor Nick will take legal action against Klein or anyone hired to follow them.

Especially if they're carrying cameras for a reality show.