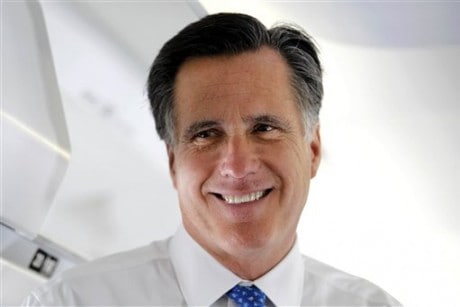 Several weeks ago, I posted a video of what appeared to be Mitt Romney addressing a group of high-rolling donors about traveling to China to buy a factory. It was interesting to hear the candidate talk off-record in such sympathetic environs. He sounded genuine. Not likeable, necessarily, but at least recognizably mammalian.

Below is a much shorter video, seemingly from a similar event. Thanks to the Sky Dancing blog for calling attention to it, and to Ms. Ann Onymous for posting it to the web. Ms. Onymous has posted a bunch of these things in the last month — the vid in which Mitt (or someone who sounds exactly like him) acknowledges, graciously, that he was born "with a silver spoon" in his mouth; the vid in which he pines for a foreign policy that commits 20,000 or so American troops to Iraq, indefinitely; the vid in which he jokes that he'd have an easier time becoming president if he was Latino. But none is so interesting as the one below.

The full quote from Mitt (or someone who sounds exactly like him):

Again: The video's short. It's impossible to know if this quote's been taken out of context. Maybe Mitt (or someone who sounds exactly like him) prefaced it by saying: "I would have to be a terrible person to say something like …" or perhaps "Too many of my Republican colleagues like to demonize the other side, by saying things such as …"

Or maybe the video is what it appears to be: Mitt Romney (or someone who sounds exactly like him) saying that half of the American electorate is comprised of slobs.

I can't help but think of how the other fellow running for president characterizes those who vote for his opponent — how he emphasizes the essential sameness of people, and the sad supeficiality of their political differences. That other fellow, please recall, is the one allegedly running a campaign of "division and hate."

See the vid AFTER THE JUMP …