Earlier this week I posted the homorerotic mailer being used against pro-equality Republican Mark Grisanti in his state senate reelection race.

Another anti-gay mailer has turned up in the race between NYC Councilman Eric Ulrich and his GOP primary opponent, attorney Juan Reyes. Reyes (pictured), a former aide to Rudy Giuliani, sent the mailer which accuses Ulrich of (gasp) having gay friends, and hiring gay staffers: 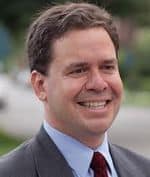 The mailer accuses Ulrich and his wife of being “frequent dinner companions” of an openly-gay Democratic councilman (a reference to another member of the Queens delegation, Jimmy Van Bramer), and “cozying up” to New York City Council Speaker Chris Quinn, who is the first woman and first lesbian to hold her leadership post.

In addition, the mailer “outs” Ulrich’s chief of staff and another staffer – without naming names – saying both are “openly gay.”

All this is an attempt to cast Ulrich, who is running with conservative support, as a “flip-flopping” liberal.

The front of the mailer also suggests Ulrich, 27, is too immature to be a senator, noting he made “rude,” “vulgar” and “inappropriate” comments (on Twitter) about former Sen. Bob Dole’s “anatomy” after Dole announced his support for Reyes.

Said HRC's Fred Sainz of both mailers: “They are so patently ridiculous they have no place in a modern day election. These chuckleheads are campaigning for the Fred Flintstone award.”