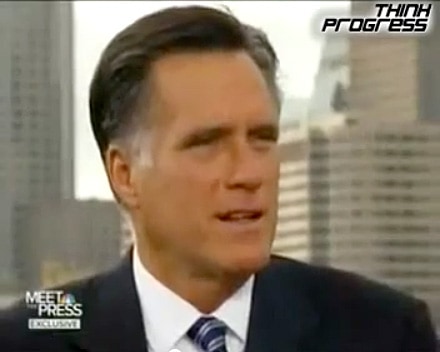 In a Meet the Press interview over the weekend, Mitt Romney made headlines when he said that "there are a number of htings that I like" about Obamacare.

"…he suggested he would retain: 1. The guarantee that insurance companies couldn’t discriminate against people with pre-exisiting conditions, and 2. The provision that allows young adults to stay on their parents plan.

Just hours later, his campaign quietly told a conservative website that he actually opposes those provisions of Obamacare:

In reference to how Romney would deal with those with preexisting conditions and young adults who want to remain on their parents’ plans, a Romney aide responded that there had been no change in Romney’s position and that “in a competitive environment, the marketplace will make available plans that include coverage for what there is demand for. He was not proposing a federal mandate to require insurance plans to offer those particular features.”

A Romney aide also told Buzzfeed: "Gov. Romney will ensure that discrimination against individuals with pre-existing conditions who maintain continuous coverage is prohibited."

Of course, it's in Romney's best interest to be unclear. The less people who understand how he's going to screw them, the better.

Watch the Meet the Press clip, AFTER THE JUMP…