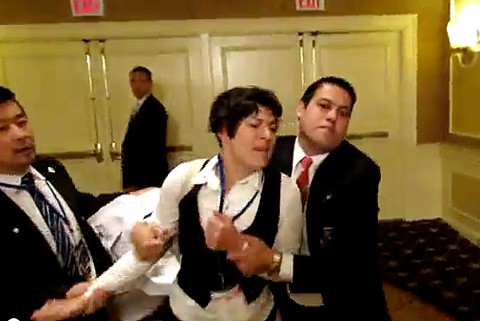 A pair of female protesters who said they were with ACT-UP Philadelphia as they were being escorted out heckled VP nominee Paul Ryan today at the Values Voter Summit, yelling "corporations are not people" and a few other things before being drowned out by chants of "USA, USA, USA" from the attendees.

As they were walked out, one told a cameraman "I'm a concerned citizen."

The other, who said she was from ACT-UP Philadelphia, said, "The funding that people need to get HIV meds can't happen when there is corporate donations in this election. Our politicians need to stand up for people with HIV…?

Ryan attacked Obama over foreign diplomacy in his speech. Read excerpts from it AFTER THE JUMP as well. As Right Wing Watch notes, Ryan is making these remarks at a conference that makes a mockery of diplomacy and terrorism. 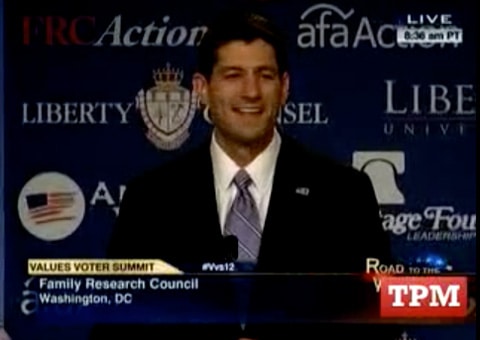 Look across that region today, and what do we see? The slaughter of brave dissidents in Syria. Mobs storming American embassies and consulates. Iran four years closer to gaining a nuclear weapon. Israel, our best ally in the region, treated with indifference bordering on contempt by the Obama administration. Amid all these threats and dangers, what we do not see is steady, consistent American leadership. In the days ahead, and in the years ahead, American foreign policy needs moral clarity and firmness of purpose. Only by the confident exercise of American influence are evil and violence overcome. That is how we keep problems abroad from becoming crises. That is what keeps the peace. And that is what we will have in a Romney-Ryan administration …

The President is given to lectures on all that we owe to government, as if anyone who opposes his reckless expansion of federal power is guilty of ingratitude and rank individualism. He treats private enterprise as little more than a revenue source for government. He views government as the redistributor and allocator of opportunity. Well, the results are in for that, too. Here we are, after four years of economic stewardship under these self-proclaimed advocates of the poor, and what do they have to show for it? More people in poverty, and less upward mobility wherever you look. After four years of dividing people up with the bogus rhetoric of class warfare, just about every segment of society is worse off …

In the President's telling, government is a big, benevolent presence – gently guiding our steps at every turn. In reality, when government enters the picture, private institutions are so often brushed aside with suspicion or even contempt. This is what happened to the Catholic Church and Catholic Charities this past January, when the new mandates of Obamacare started coming. Never mind your own conscience, they were basically told, from now on you're going to do things the government's way. Ladies and gentlemen, you would be hard pressed to find another group in America that does more to serve the health of women and their babies than the Catholic Church and Catholic Charities. And now, suddenly, we have Obamacare bureaucrats presuming to dictate how they will do it. As Governor Romney has said, this mandate is not a threat and insult to one religious group – it is a threat and insult to every religious group. He and I are honored to stand with you – people of faith and concerned citizens – in defense of religious liberty.