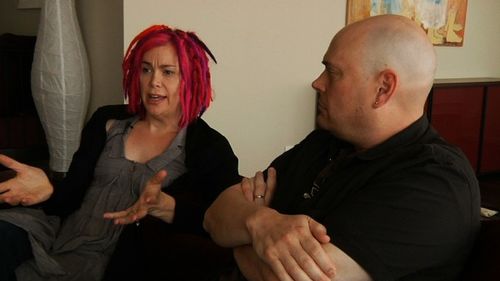 The New Yorker this week offers a lengthy, detailed profile of Lana and Andy Wachowski, the filmmaker siblings behind The Matrix franchise, the forthcoming Cloud Atlas and the 1996 lesbian crime caper Bound.

In addition to looking at their cinematic oeuvre, reporter Aleksandar Hemon gives readers a look into the elder Wachowski's transition from Larry to Lana.

As is the case with their movie career, 2001: A Space Odyssey played an instrumental role:

Lana initially hated “2001,” and was perplexed by the mysterious
presence of the black monolith. “That’s a symbol,” Ron explained. Lana
told me, “That simple sentence went into my brain and rearranged things
in such an unbelievable way that I don’t think I’ve been the same since.
Something clicked inside. ‘2001’ is one of the reasons I’m a
filmmaker.”

Perhaps not coincidentally, Lana’s gender
consciousness started to emerge at around the same time. In third grade,
Larry transferred to a Catholic school, where boys and girls wore
different uniforms and stood in separate lines before class. “I have a
formative memory of walking through the girls’ line and hesitating,
knowing that my clothes didn’t match,” Lana told me. “But as I continued
on I felt I did not belong in the other line, so I just stopped in
between them. I stood for a long moment with everyone staring at me,
including the nun. She told me to get in line. I was stuck—I couldn’t
move. I think some unconscious part of me figured I was exactly where I
belonged: betwixt.” Larry was often bullied for his betwixtness. “As a
result, I hid and found tremendous solace in books, vastly preferring
imagined worlds to this world,” Lana said.

Lana also discusses coming to terms with her identity, a realization that brought on suicidal thoughts but, eventually, familial and self-acceptance: "My biggest fears were all about losing my family. Once they accepted me,
everything else has been a piece of cake."