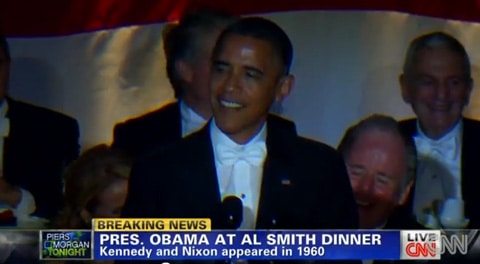 "In less than three weeks voters in states like Ohio, Virginia and Florida will decide this incredibly important election, which begs the question: What are we doing here?…This is the third time that Gov. Romney and I have met recently. As some of you may have noticed, I had a lot more energy in our second debate. I felt really well-rested after the nice, long nap I had in the first debate."

“I heard from the Federal Election Commission: From now on, whenever he appears on TV, there’s a recording of me afterward that says, ‘I’m Mitt Romney and I approve this message.’ I was actually hoping the president would bring Joe Biden along this evening because he will laugh at anything.”

Watch excerpts and raw video, AFTER THE JUMP…