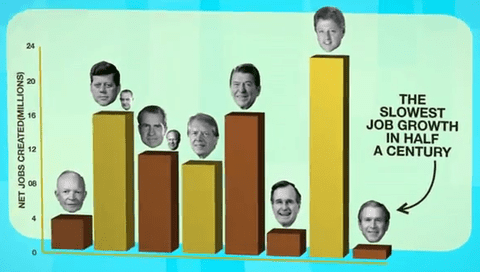 Lucas Gray, an animator for The Simpsons and Family Guy, was so impressed with the concise economic lesson President Obama gave in an April 2012 speech that he added some illustrations and posted it on YouTube under the name "Why Obama Now."

In this final cut, called "Why Obama Now," Gray's illustrations perfectly complement Obama's point-by-point denunciation of right-wing, tax-cutting policies that got the nation to where it is today and show the vast difference between the Republican Party's past projections and our contemporary reality.

For anyone still unclear on the grave financial toll GOP-led efforts have wrought, check out Gray's video AFTER THE JUMP…

The graphics and statistics are illuminating and horrifying.