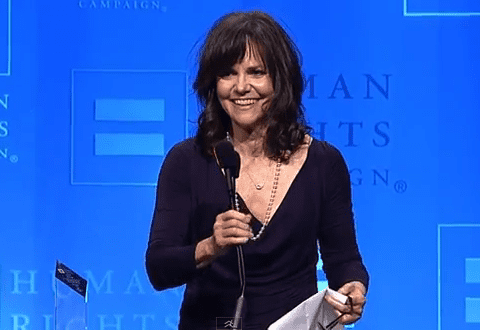 Towleroad intern Sam Greisman mentioned last Friday that he was headed to DC to present his mother Sally Field with HRC’s Ally for Equality Award. So he did, and he was marvelous, setting the stage with stories of gratitude and humor before the lovely actress took the mic to deliver a touching and eloquent speech of her own.

Field’s remarks, delivered after she removed her heels to meet the mic halfway, emphasized the biological innateness of being gay. “Sam is what nature intended him to be,” she told the audience. She knew well before her son that he was gay, of course, and had wanted to explain it all to him, but thanks to her other sons’ insistence, she let Sam find his own way. And she couldn’t be more proud.

Parents who kick out their children or turn their backs, she said, need to realize “these children have something important to teach their parents:” Love and acceptance. Some children are gay, she explains, “So the f*ck what?”

In addition to the always lively Field, last night’s festivities also included speeches from Academy Award winning screenwriter Dustin Lance Black and Newark’s hero mayor, Cory Booker, as well as the presentation of the National Equality Award to the NAACP and its president, Ben Jealous.

Introduced by HRC president Chad Griffin and a video highlighting his organization’s commitment to equality, Jealous told the audience that we owe it to our children to turn our pledge of allegiance — “liberty and justice for all,” in case you’ve forgotten — into a reality.

“As an American people, we celebrate the many times that our nation has led this world away from hate and ever toward hope,” he said. “In this precipitous moment, when we as a movement are on the brink of massive change and tremendous progress…let us stand up for marriage equality from coast-to-coast and border-to-border!”

Watch videos of all the speeches, including Sam’s introduction of Ms. Field (!), AFTER THE JUMP.