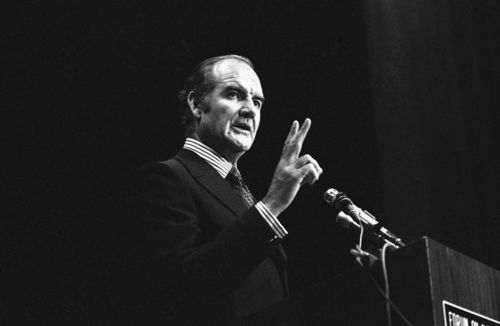 In 1972, Senator George McGovern waged a largely grassroots campaign to unseat Republican President Richard Nixon. After winning his party’s nomination, McGovern and his anti-war progressivism gave the Democrats a reason to hope. The Vietnam War still raged; tricky Dick was ruffling feathers and the good old days seemed like a thing of the past. But those hopes were dashed when Nixon routed McGovern’s campaign.

For the next decades, even while he was still a sitting senator, McGovern’s name became synonymous with quixotic, ultimately doomed campaigns campaigns. His political vision, however, lived on, and the problems he hoped to solve still remain relevant today.

The standard analysis was that it was a liability to be described as “another McGovern,” which meant “unelectable.” In August, the Republican magazine the Weekly Standard licked its chops in a story titled “Barack Hussein McGovern: The specter of 1972 is haunting the Obama campaign.”

Among the horrors of that convention 40 years ago? Support for Title IX, which banned discrimination against women in federal education funding, and the Equal Rights Amendment. Other delegates spoke out in favor of gay rights, legal contraception for unmarried couples (still a touchy issue in 1972), and abortion rights.

With regard to his commitment to equality and fairness, McGovern earlier this year came out for marriage equality, saying, quite bawdily, “I’m a ‘conservative’ when it comes to marriage. I think if two people love each other, are living together and having sex, they ought to get married.”

Sadly, that fiery spirit is no more: McGovern’s family confirmed this morning that the former senator died at the age of 90. Even in his later years, McGovern remained a champion of left-leaning causes. From the New York Times:

To the liberal Democratic faithful, Mr. McGovern remained a standard-bearer well into his old age, writing and lecturing even as his name was routinely invoked by conservatives as synonymous with what they considered the failures of liberal politics.

He never retreated from those ideals, however, insisting on a strong, “progressive” federal government to protect the vulnerable and expand economic opportunity while asserting that history would prove him correct in his opposing not only what he called “the tragically mistaken American war in Vietnam” but also the American invasions of Iraq and Afghanistan.

He believed George W. Bush should have been impeached for those invasions.

In addition to his liberal politics, McGovern will also always be known for his work with the McGovern-Fraser Commission: The Democratic Party group that hoped to prevent the turmoil they saw during their 1968 nominating convention by creating rules that still govern both parties’ selecting process and let the primary replace the caucus as the dominant selection method. That contribution deserves more attention, I think, than the derisive “another McGovern” smear. It changed American politics forever.

For those of you interested in campaigns and campaign commercials, check out McGovern’s infamous ad hitting President Nixon on his dishonesty, corruption, secrecy, bugging and, yes, even wheat deals AFTER THE JUMP.