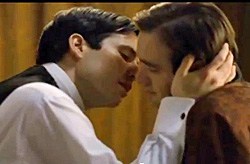 Greek people took to social networking sites including Twitter to complain about the NET channel's decision to axe a scene from episode one of the series showing a kiss between a visiting duke and Downton's unscrupulous footman Thomas. NET defended its move, citing parental guidance viewing rules.

"As incredible as it may seem for a democratic country in the 21st century, officials of the NET television channel censored the scene of a kiss between men from the TV drama Downton Abbey," the Syriza party said in a statement.

"This is of course an obvious case of censorship, an extreme act of homophobia and discrimination which unfortunately, after what has been happening recently, we cannot characterise as unprecedented."