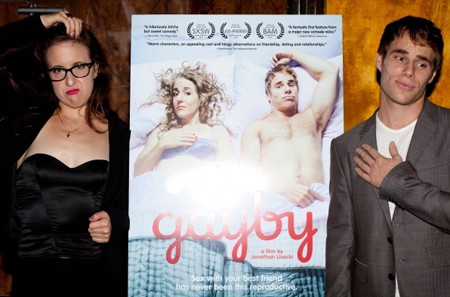 Some months ago in this column I asked “where are the new gay classics?”. I didn’t expect to get an answer so quickly. The question was prompted by the inevitable move of gay cinema away from the arthouse experimental fringes to dumbed down romantic comedies. Assimilation has its price; straight people suffer through endless Kate Hudson / Katharine Heigl “comedies” and we get those Eating Out movies. But here comes GAYBY to save us. The miracle of birth movies! Here’s a gay comedy that’s genuinely hilarious and well acted. Go see it with a ton of friends.

Gayby is the story of best friends Jenn (Jenn Harris) and Matt (Matthew Wilkas) who are both single and stuck. Jenn’s career as a yoga instructor is on auto-pilot and Matt’s life is blocked because he can’t get over his ex-boyfriend. They decide to make good on an old college conversation and have a baby together… the old-fashioned way. The decision rocks their mutual complacency and sends comic ripples through their extended family of (very funny) friends.

I spoke with writer/director/co-star Jonathan Lisecki by phone last week. He was walking alongside the road on his way to a panel at The Hamptons Film Festival. With audible traffic on the other end of the line, I worried that he’d walk right into it and we’d lose this fresh new comic voice. But the only car that came close was a friend offering him a ride who was quickly rebuffed. “I’m walking and talking. I’m doing an interview!” 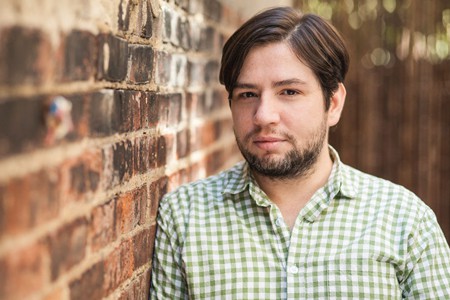 I love talking to audiences. Part of your job as a filmmaker in this day and age is you have to really be out there and promote it. A question I get that I’m starting to get a little “really?” about is “Did they make it up as they went along?”

SEX SCENES, SHOWGIRLS JOKES, AND MORE AFTER THE JUMP…

The actors are so good that people think they made it up as they went along. But it’s very tightly scripted.

Your main characters “Jenn & Matt” are played by Jenn & Matt!

I just died from the Showgirls joke. Brilliant.

There’s so much depth to Showgirls that no one talks about because they wanna diss it. I love talking about it like it’s a Scorsese film or high art. It’s a classic film no matter what way you want to call it a classic. I am aware — and so is Gina Gershon — of the comedy in the movie. She knows it’s a satire. It’s a crime she doesn’t work every single day. 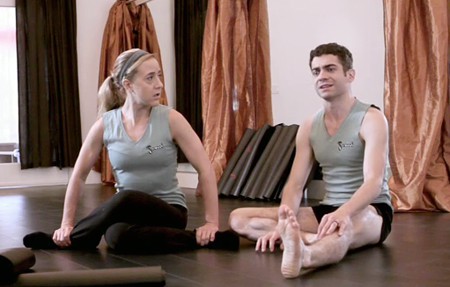 Agreed. That’s an Oscar-worthy turn. The dance break scene [unrelated to Showgirls] is so, great.

You said tightly scripted but is there anything the actors came up with?

There’s a line here or there that snuck it’s way in. I like to give Jenn credit for that backstroke out of the conversation. She says “I’m just going swim on out of here.” That’s so funny and she definitely made that up but it’s 99% the script. We did let the camera keep going a lot and frankly The Showgirls stuff is a result of that. But often we cut that stuff. My friends are hilarious but I didn’t want to be indulgent, I wanted to serve the plot. There’s amazing stuff that I can’t wait to put on the DVD that’s more improvisational. But we stuck to the script hard core in the editing room. I just really wanted to have a tight comedy. I don’t like any two-hour comedy except for maybe Bridesmaids. Back in the day comedies were in and out 90 minutes. Period.

Since your friends are hilarious do you ever steal jokes from them? Like, ‘Ha! I’m putting that in my script!’

No girl, you’ve been talking to me for half an hour do I sound like I have to steal lines from other people? Whaaaaaa? [Laughter] No, I’ve been storing up lines for years. What I do, frankly, if I say something or I hear something that I can turn into a joke, I e-mail myself on the spot.

This was originally a short with Jenn & Matt. A lot of people make shorts now as trailers to features they want to make. Is that what happened?

Not at all. I only had the money to make a short and I wanted to do it with just Jenn & Matt. It played like 150 festivals or something ridiculous like that all over the world. As I kept seeing people I was like ‘I have more of the story.’ A year or a year half ago, the two ladies who ended up producing it, they said ‘Why don’t you make a feature of Gayby?’

I know. It was crazy and perfect and will probably never happen again. Most people sit around with their script for years and years. There’s something to be said for when an opportunity presents itself you should jump on it. I say I wrote it in three weeks which sounds absurd but really I typed it in three weeks. I’d been thinking about it for a year.

The movie has a fun ensemble feel but when you’re taking it from the short to the feature did you ever think, “I’m adding to many characters?” or decide to pull back?

Not at all. Part of writing the script is you should allow yourself to go wherever you want to go. In the editing room you’ll figure out what feels like padding. Part of being an actor and a theater director in New York is that I know tons of genius actors. Part of the joy of doing my first feature was getting to work with these people that I love. I wanted to have as many people as possible. In a way the current trend in the indies is, like, ‘three people go to the woods and talk about the girl that broke up with them and their heart is broken because they’re a straight white guy.’ Blah blah blah. No! I’m going to have locations and 28 cast members and I’m going to have a dance break. You don’t really see big juicy ensembles. I wanted to experience New York like you experience it: People have jobs, people have apartments in Brooklyn, people have friends and coworkers.

The characters are vivid and well delineated from each other.

What you end up doing is basing characters off of stuff you’ve gone through – it’s crazy comedic amplification of things I actually experienced. And then you change it to be more like the characters. 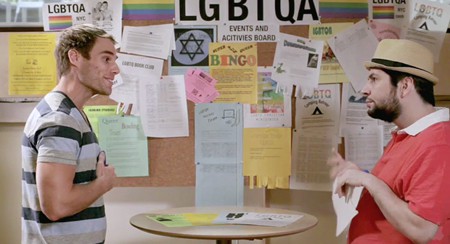 I really appreciated the jokes about people embracing your inner womanhood as a girlyboy myself.

Thank you! It’s weird. People get into this whole stereotypey thing. Honestly have you been around gay people when they hang out by themselves? We have our own language that I am proud of a person. I am not ashamed of being queeny. I don’t care if you are. It’s weird. Sometimes straight journalists are like ‘Do you think you’re offending people?’ and I’m like ‘You know what? Fuck you!‘ [Laughter]

I specifically had a movie with tons of gay people so we could have all the rainbow or our coalition shown. But I, personally, have the most fun with my friends who are the most dishy and aren’t afraid to go there. I wanted to represent that and I think that’s totally a true part of our culture. As long as those people who are in the movie have their own identity and own sexuality and aren’t just there to say yes and snap their fingers when a straight person says a stupid joke. That’s offensive to me when I see that sort of thing.

They’re not just accessories to Jenn in other words.

Exactly. I didn’t want that. That’s a staple of the romantic comedy to have the accessory sassy friend.

Do you feel guilty for perpetuating the stereotype of every gay man being ridiculously hot and chiseled?

Um, the straight guys are ridiculously hot, too! But look at me. I’m in the movie and I’m not chiseled at all, girl.

But Mike Doyle, for example, he couldn’t be more out of a comic book. The square jaw!

The funny thing is he even added the glasses. When I watched the dailies I was like ‘Ohmygod he looks so much like Clark Kent!’ Mike is amazing. He just happens to look like that. It’s hard to not find actors who go to the gym. That’s one of the things they like to do. I don’t like to do it but they do. [Laughter] 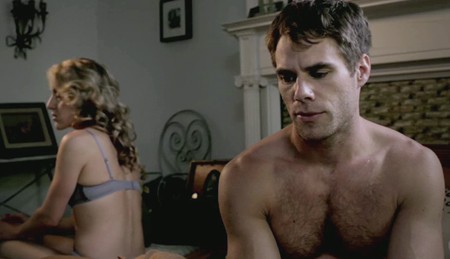 Jenn & Matthew. Is it true that they’re that close in real life?

Yes. I met them when they had just moved to New York from theater school so they went to college together. The photos in the movie are real. Even though I wrote this about a friend of mine they had a relationship that was true to the kernel of the idea. They are different than the characters in the movie, I have to be clear about that. They’re not playing themselves. But what they bring is kind of perfect and can’t be recreated.

Jenn’s athletic sex scene is beyond.

That’s my favorite. We filmed it on my birthday which made it extra exciting.

How long did that take? It seems like a lot of setups.

The thing is we actually just kept the camera rolling for ten minutes and then did jump cuts. While they were doing it I was like ‘Now do a handstand! Now jump up on things!’ So we got all that in there but it was really just one long take. They were comfortable with each other and having a good time. We had cake for my birthday for lunch and then filmed this dirty sex scene. Amazing! Earlier that day we filmed the scene where I got to make out with the hot guy Daniel. It was a great day all around. It was Bedroom Day!

You planned that for a birthday present to yourself!

I didn’t! but I think my producers might have. [Laughter]

I have to congratulate you one last time on the movie. I had to watch it alone due to timing. Comedies are so much funnier with a crowd, but I still laughed a lot. Can’t wait to see it again with friends.

I’m so glad. It’s fun in the theater. When we played at the Castro in front of 1400 gays I could barely hear a third of the movie! I love watching the movie with an audience and talking to them. It’s my favorite part of the process. They have to kick me out of the theater 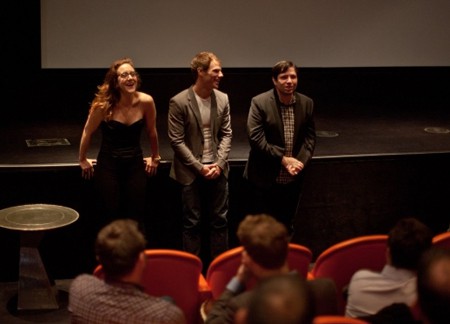 GAYBY is now playing at Cinema Village in New York City. It opens in Los Angeles on October 26th.