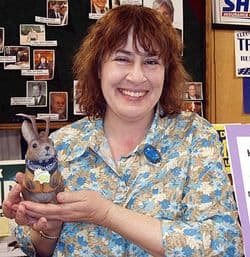 Here’s a reminder that not all political members toe the party line: Kansas State Rep. Jan Pauls, a Democrat who has been office for over 20 years, has rejected the national party’s endorsement of marriage equality.

“The Democratic national platforms have never been that important in local or state politics. We’re a little different here,” she said, according to Back2Stonewall. “I think most Kansans’ concerns are not that the homosexuals want equal rights but superior rights. That’s what makes this issue so difficult.”

Rep Pauls’ husband, Ron Pauls, is even worse, saying “homosexuals don’t know how to love”. “Homosexuals are all about the sex,” he claims. “Pretty soon you won’t be able to quote Bible verses from the pulpit if they’re against homosexuality.”

The Kansas Democratic Party apparently isn’t keen on toeing the line, either: they’re backing Pauls’ reelection campaign. She was very nearly defeated during the primary by an openly gay man named Erich Bishops.