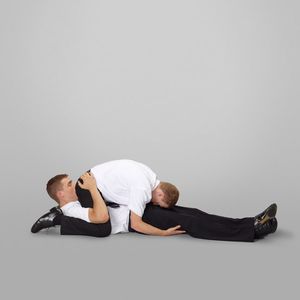 PHOTO OF THE DAY: Mormon Missionaries take all sorts of positions.

President Obama swung by The Tonight Show last night and talked about a great many things including the stupidity of Richard Mourdock and his soccer rivalry with Donald Trump. Obama wasn't the only one who laughed off Trump's embarrassment of an "October Surprise". Stephen Colbert enjoyed it so much that he is taking the mogul's lead and offering him $1 million dollars if he will allow Colbert to tea-bag him. Well if that visual doesn't put you off your dinner I don't know what will.

Despite the Log Cabin Republicans' recent support of Mitt Romney, Ben Adler of The Nation tell us all to not kid ourselves about Romney's stance on LGBT rights. Case in point, a recent report from The Boston Globe about Romney's rejection of birth certificates for same-sex parents.

Yesterday in Minnesota gays were likened to Hitler, today in Maryland a pastor claimed that gay rights supporters are worthy of death. Just class and human decency all around.

Also yesterday we reported on kissing lesbians making a stand at an anti-gay protest in France. Well now we bring you an interpretative dance in the form of an anti-gay activist in a lycra spandex bird suit from that same protest. Point made.