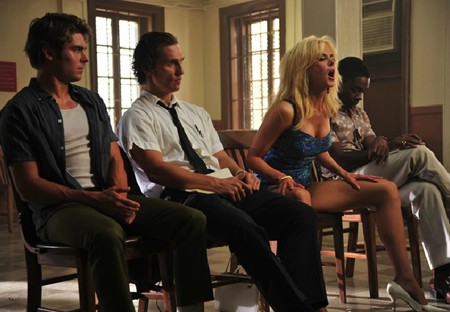 I can't recall how THE PAPERBOY begins exactly though I saw it just a few days ago. Was it a shot of Zac Efron's body gliding through a pool, losing its hard fixed shape through the watery prism. Was it a grisly black and white flashback of a murder? Was it Macy Gray smoking, staring dully just off center of the camera. It doesn't matter though my confusion is telling. Lee Daniel's third movie is a mad undisciplined mix of just these things: eroticized bodies, physical violence and character beats. If the film never settles down, eventually you settle into it.

Macy Gray helps. Her voice is so evocative she doesn't even need to be singing to send you. Director Lee Daniels, wise to the specific gifts of his actresses (the proof is all over Precious), knows this. If he isn't always sure which movie he's delivering (a cold case murder investigation, a death wish character study in multiples, a messy civil rights period drama) he knows how to package it. He acclimates you to The Paperboy's time and place (swampy sixties summer in the south) and agitated horniness via husky Anita (Macy Gray), all wigs and cigarettes and "how much am I getting paid for this?" twitchiness. It doesn't take Anita long before she loses her wariness, lost in the sensationalistic details of the story she's telling.

Which is not so much her story…

…though, her role as The Help gives Lee Daniels ample opportunity to graft more racial discomfort and American history on to the text than you'd find in the Pete Dexter novel its based on. The story is about crusading (and *ahem* cruising) journalist Ward (Matthew McConaughey) and his younger brother Jack (Zac Efron) who get mixed up in the lives of Death Row inmate Hillary Van Wetter (John Cusack) and slutty beautician Charlotte Bless (Nicole Kidman) who writes dirty letters to multiple inmates but settles on Hillary, a strong candidate for the filthiest person alive — and yes, FWIW I think John Waters will love this movie — as her ultimate prize.

As in Precious, Daniels shows an uncanny ability to inspire his actors to dig deep enough that they're often at risking of shoveling straight through to camp. You wouldn't think any mainstream male movie star would put himself in a more compromising position than Matthew McConaughey did at the tail end (haha) of his farewell performance in Magic Mike , the one that basically ended ass up to camera, but he does. Unfortunately it's with far more disturbing and less sexy results. Efron, also no stranger to selfsploitation, seems entirely okay with spending half the picture in his underpants and engaging in a sort of masturbatory comic duet with Macy Gray. The director originally wanted his friend Oprah Winfrey for the role which is unfathomable… and hilarious. I can't quite imagine it though I can imagine her shouting "ZacEffrroOOONNNNNNN!!!!!" on her back with comic exaggeration, welcoming him to her show. 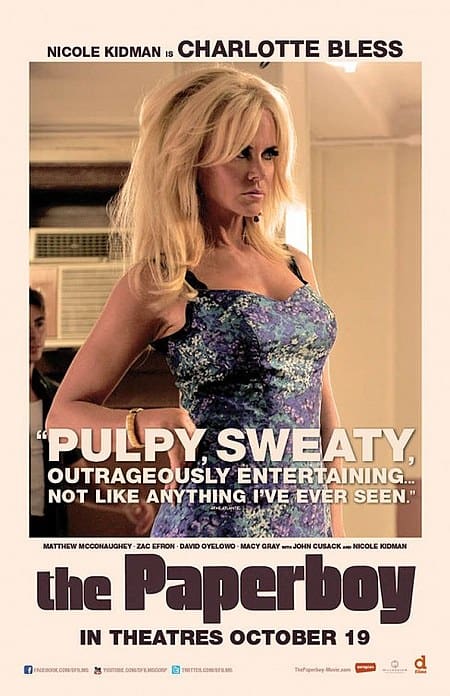 It will surprise no one who's been paying any attention that Nicole Kidman is the MVP, once again throwing herself into a controversial role with the hunger usually acquainted with actors who've waited for the big break forever. You could argue that Kidman is the cinematic equivalent of Madonna: brave, button-pushing, autoerotic, and continually willing to push herself long past the point where her peers have begun to coast or decided they're too old for this shit. Her first sex scene with Mr Cusack, both telepathic and obscene (no really), has instantly cornered the market on Craziest Sex Scene of 2012.

By now you've undoubtedly heard that The Paperboy features a scene in which Nicole Kidman pees on Zac Efron and a scene in which she cajoles him into dancing in the rain in his tighty whities. You've heard true. The best thing I can possibly say for this vivid messy Southern Gothic, which is always watchable but often quite unpleasant and artistically erratic, is that that those two scenes are hardly alone in their "am I really seeing this?" abandon. The Paperboy is so ripe and so rank that it's sure to be a polarizing love it or hate it film experience. Either response is fully justified but fans of outre cinema, highwire acting, and future cult cinema would be crazy to miss it.