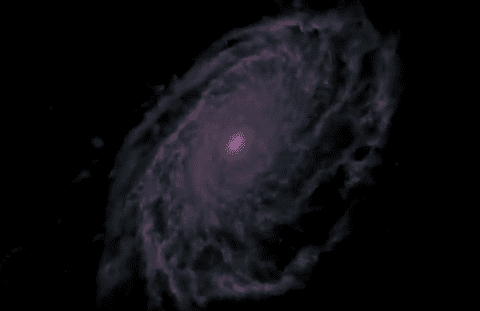 Forget everything you knew about galaxy formation:

Graceful in their turnings, spiral galaxies were thought to have reached their current state billions of years ago. A study of hundreds of galaxies, however, upsets that notion revealing that spiral galaxies, like the Andromeda Galaxy and our own Milky Way, have continued to change.

“Astronomers thought disk galaxies in the nearby universe had settled into their present form by about 8 billion years ago, with little additional development since,” said Susan Kassin, an astronomer at NASA’s Goddard Space Flight Center in Greenbelt, Md., and the study’s lead researcher in a press release. “The trend we’ve observed instead shows the opposite, that galaxies were steadily changing over this time period.”

AFTER THE JUMP, a NASA computer model of a disk galaxy’s so-called life and a brief NASA documentary about their findings.