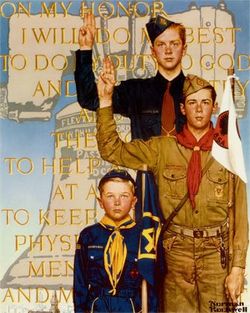 The Golda Och Academy in West Orange, NJ, is the latest institution to discontinue its ties to the Boy Scouts over that group’s homophobic policies. GLAAD passes on word that the Jewish day school decided not to renew its Boy Scout charter, meaning that the local troop that held meetings there will have to find a new HQ.

The school’s head, Dr. Joyce Raynor, wrote a letter earlier this month explaining Golda Och Academy’s stance: “The scouts represent a problematic image for many families… To exclude same-sex families from membership and adult volunteerism is in direct contradiction of School policies, which place high value on inclusion It has been decided that GOA cannot act as the sponsor organization until [the BSA’s] national policy changes.”

The leaders of the troop that met at Golda Och actually agree with the school’s position. Assistant scout master Rabbi Lisa Vernon described the policies as “terrible” and “egregious”. But she also added, telling New Jersey Jewish News, “You can’t change the policy if you are not part of Scouting.”

As it stands, the group Scouts for Equality says 254,645 “members of supporting councils and troops” have joined their movement to reverse the BSA’s policies.

Previous Post: « Joe Walsh Was Proud Of Being Gay-Friendly And Pro-Choice In 1996
Next Post: President Obama Backs Washington State’s Referendum 74 »