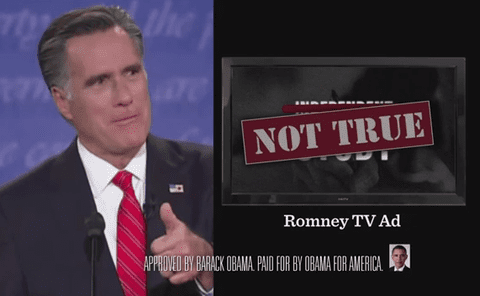 Saturday is no day of rest for the presidential candidates and their campaign teams. Both President Obama and challenger Mitt Romney released new ads today.

In Obama’s ad, “Dishonest“, the narrator highlights Mitt Romney’s alleged dishonesty in his debate claim he doesn’t favor a $5 trillion cut that favors the wealthy (a claim that is actually at least partially true). The ad also takes aim at the actual mendacity inherent in a pro-Romney ad claiming Obama wanted to impose $4,000 in taxes on the middle class. The research on which Romney based his claim was done by a pal from his days at Bain & Company. Dick Cheney and Newt Gingrich were also involved.

Romney’s ad takes a more softer tone, featuring a woman named Melanie McNamara who explains that she voted for Obama in 2008 but has been “disappointed” by his first term and remains worried about the 450,000 women who have lost their jobs over the past four years. That ad is called “Melanie“.

Watch both campaign ads AFTER THE JUMP.