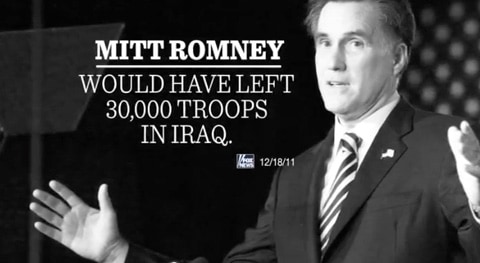 Tonihgt's presidential debate at Lynn University in Boca Raton, Florida will focus on foreign policy and the Obama campaign previewed some strategy in a new ad released this morning, Political Ticker reports:

The 30-second spot, "Rebuilding," faults the GOP nominee for saying during the Republican primary that the president was wrong to withdraw troops from Iraq.

"I think we're going to find that this president by not putting in place a status in forces agreement with the Iraqi leadership has pulled our troops out in a precipitous way and we should have left 10,000, 20,000, 30,000 personnel there to help transition to the Iraqis' own military capabilities," Romney said in a Fox News interview last December.

His comments came days before the final U.S. combat troops were pulled from the country.

Watch the new spot, AFTER THE JUMP…