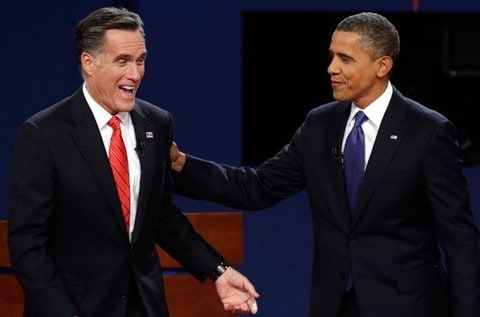 The economy was the name of the game during the first 2012 presidential debate last night, providing voters with their first side-by-side comparison of President Obama and GOP opponent Mitt Romney’s dollars and cents policies.

Romney of course again justified corporate tax breaks that he claims will allow rich people to hire more poor people, thereby improving the latter group’s economic station. But Obama called him out, saying Romney’s plan was simply the rehashing of a Reagan-era “trickle down” economics.

“Are we going to double down on the top-down economic policies that helped to get us into this mess, or do we embrace a new economic patriotism that says, ‘America does best when the middle class does best’?” said the president. Romney tried to turn the “trickle down” motif against the president, saying, “[The Obama administration advocates] a trickle-down government approach, which has government thinking it can do a better job than free people pursuing their dreams — and it’s not working.”

That was the main conversation last night: is it better to help those at the top already or to work to give those in the middle or below a helping hand, whether that be in the form of tax breaks, providing affordable insurance or creating jobs?

Though there will be no consensus on a winner or loser in this debate, many believe Romney did better on “style” — that is, being poised and commanding on stage — while Obama won when it came to facts. “The president was especially strong in picking apart Romney’s ill-conceived plan to turn Medicare into a voucher program, which independent analysts say would leave elderly Americans down the road at the mercy of private insurance companies,” wrote the editorial team at the Sun-Times. “Maybe those vouchers would cover the bill, but quite likely they would not over time, even as traditional fee-for-service Medicare would wither away.”

And the Washington Post‘s Lori Montgomery opened her analysis with “Whoa, whoa, whoa. Mitt Romney needs to spend a little more time with his budget reports.” While the Los Angeles Times called out Romney for falling back on the “death panel” rhetoric the right peddled so hard to fight Obama’s healthcare law.

Perhaps the most ear-pricking part of the evening, for those who follow social policy, at least, was when Romney, repeating something conservatives have become fond of saying, claimed his economic plan was “moral.”

“I think [the federal deficit] not just an economic issue, I think it’s a moral issue,” Romney said. “I think it’s frankly not moral for my generation to keep spending massively more than we take in knowing those burdens are going to be passed on to the next generation and they’re going to paying the interest and the principle all their lives.” I’ve included a clip of that AFTER THE JUMP.

For his part, Obama opened the debate by using a term he’s been lobbing around recently: “economic patriotism.” “Are we going to double down on the top-down economic policies that helped to get us into this mess or do we embrace a new economic patriotism that says America does best when the middle class does best?” he said.

Through all the wonk economics talk, the clearest proclamation last night, the one most unhindered by rhetoric and jargon, was Romney’s promise to defund public broadcasting, even if that means seeing moderator Jim Lehrer suffer – and Big Bird, too.

“I’m sorry Jim. I’m gonna stop the subsidy to PBS. I’m gonna stop other things,” Romney said.”I like PBS, I like Big Bird, I actually like you too.” Not enough to maintain funding levels, though.

Watch that clip, as well as some “zingers” compiled by TPM, a clip of Obama saying Romney’s “bold” tax plan has become “never mind,” footage of Romney explaining the morality of his economic plans, as well as a handy 100-second TPM recap of the entire 2-hour event AFTER THE JUMP.