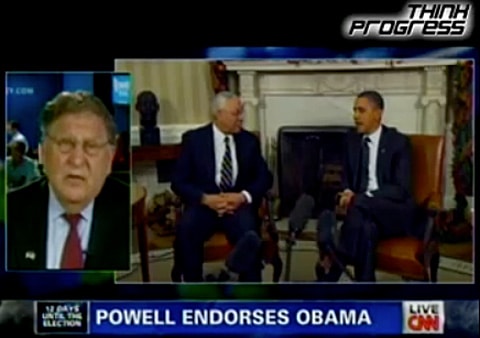 Romney surrogate John Sununu applauds Colin Powell for what he says is a racist endorsement of Obama:

MORGAN: Final question, Colin Powell decided to opt for President Obama again, despite apparently still being a Republican. Is it time he left the party, do you think?

SUNUNU: I'm not sure how important that is. I do like the fact that Colin Powell's boss, George Herbert Walker Bush, has endorsed Mitt Romney all along. And frankly, when you take a look at Colin Powell, you have to wonder whether that's an endorsement based on issues or whether he's got a slightly different reason for preferring President Obama?

MORGAN: What reason would that be?

SUNUNU: Well, I think when you have somebody of your own race that you are proud of being president of the United States, I applaud Colin for standing with him.

Writes DailyKos' Jed Lewison: "I guess the logical implication here is that Sununu is only endorsing Romney because he's white, right? If you ask me, I think the real story here is that Romneyland is scared to death of talking about the Richard Mourdock story—in other words, the rape thing wasn't working out for Romney, so they decided to give the race thing a try."