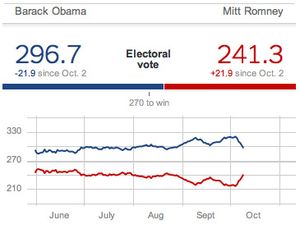 A week removed from the first candidate face-off and Romney is really feeling the effects of a successful debate. So much so that New York Times election forecaster Nate Silver says we are nearing a toss up. Anyone else getting a little nervous? Romney has made up a great deal of ground by reneging on statements that he has made previously. Case in point, his ability to debate himself. The second debate will be in a town hall format. And if you have a ticket Pizza Hut has a once in a lifetime offer for you.

A bit of welcome feistiness appeared post-debate in the form of Former President Clinton.

Check out P!nk and a hunky dance partner test in the music video for her new song "Try". Hitchcock officially enters the Oscar race with a new trailer today. Thoughts on Scarlett Johansson as Janet Leigh?

You may remember the hot air that One Million Moms was blowing this summer regarding The New Normal. Well last night the show fired back via Ellen Barkin. Also check out Stephen Colbert taunting Morrissey on his show last night.

Anti-gay wackjob Kirk Cameron recently claimed that he was "stoned" for expressing his homophobic views.

Apparently considering a "kill the gays" bill isn't enough for Uganda. Watch one Ugandan lawmaker address the Pan African Parliament and state that homosexuality needs to be condemned across the ENTIRE CONTINENT.

Ok who hasn't wished they could control their dreams? This video tells us all how.

Previous Post: « Susan Stanton Hired as City Manager in Greenfield, California
Next Post: What if the Presidential Election is a Tie? – VIDEO »