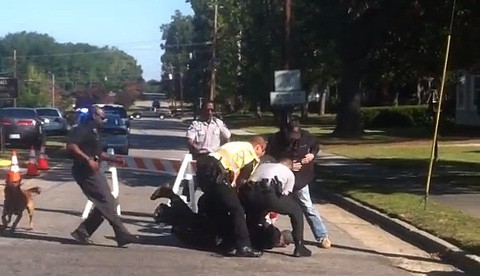 So at the funeral today for Fallen Soldier Sgt. Johnson a Westboro member decided it would be smart to stomp on the American flag. A Soldier did not take kindly to that and broke through the line, hitting one of the protesters that was disgracing Old Glory. As he was being arrested, two other Soldiers rescued the flag. The first video was filmed bu a friend of mine, the person you see jumping around with the flag is also a buddy. The second video was made by another person there to protect the funeral it is a little clearer. The person you see jumping around right before the Soldier runs in and clocks the member is a friend of mine. The Soldier was not charged and later released.

Johnson died in a suicide bomber attack while on patrol in Afghanistan. She is survived by her wife Tracy Dice.

Watch the crowd go nuts when the WBC member is taken down, AFTER THE JUMP…