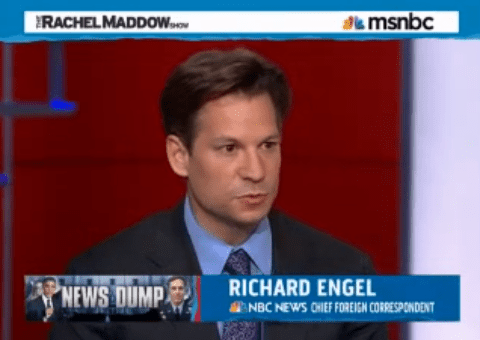 You’ve probably heard by now that CIA director David Petraeus resigned yesterday after an FBI investigation into his biographer, Paula Broadwell, revealed the general had an extramarital affair.

Rachel Maddow of course discussed this last night, bringing on both the reporter who broke the story, Andrea Mitchell, and NBC News’ Chief Foreign Correspondent Richard Engel to discuss the fallout.

One interesting thing Engel passed on is the way one former and one current CIA employee explained the agency’s feelings toward outsider Petraeus, the four-star general who commanded our forces in Afghanistan and Iraq, and how those feelings may have impacted this story: they would have had to bring the FBI in to investigate Broadwell and Petraeus.

“[Petraeus] actually wasn’t very popular in certain circles inside the CIA,” said Engel, before explaining that people really didn’t like the general. “The CIA is a bit of an old fashioned club. They like it if you come up the ranks.”

“One person at the CIA and one person formerly at the CIA put it to me this way, ‘The CIA would have to ask the FBI to look into emails that were suspicious’,” he says toward the end of the video AFTER THE JUMP.

So, was the CIA outsourcing its investigation to get Petraeus out, or is this, as some on the right suggest, a huge conspiracy so that Petraeus won’t have to testify before Congress about the Benghazi attack that killed American Ambassador Christopher Stevens and three others?

Watch Maddow and her team discuss Petraeus’ resignation AFTER THE JUMP.