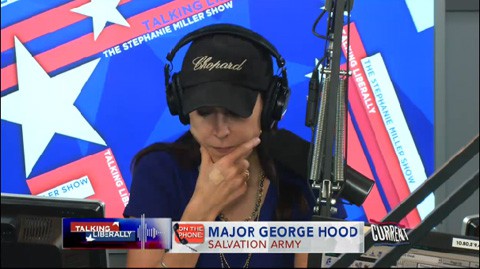 Current TV's Stephanie Miller's allowed Major George Hood of the Salvation Army to blatantly lie after she asked him if the organization is anti-gay.

"Well it’s a great misunderstanding that’s spread across the country, and we’re doing everything we can to re-educate and help people understand that the very mission of the Salvation Army calls for meeting the needs of humans without discrimination…. So discrimination is not something that we would gladly carry the banner or pride over, we want to dispel the notion that we do discriminate when the fact is we’re working very hard not discriminating and it is a part of our mission."

Hood goes on to deny that the organization gives to anti-gay causes or refuses to hire gays.

If you would like examples of the Salvation Army's stance over the years, John Aravosis at Americablog has posted a quite thorough list of them including its statement that homosexuality is "an unacceptable urge", its lobbying against same-sex marriage in the UK and Australia, its threat to stop serving NYC if it had to obey an equal benefits ordinance, and its statement by an official just this year that gays should be put to death.

Here's a timeline from The Week as well.